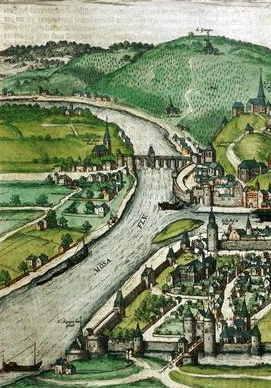 The mosan city of Jambes experienced urbanization quite recently. Beforehand, its economical activity was mainly small farming : on the hill, Masuis were growing vines, in the plain, Cotelis were growing hops. But all of them excelled in growing all kinds of vegetables. Masuis disappeared at the end of the XVIIIth century, due to the abolition of their privileges when the country was conquered by French Revolutionary army.

Every time the fortified town of Namur was besieged, Cotelis’ hopfiels were dug up. However, they carried on with their activities and became market gardeners in the XIXth century. Only after World War II was the total disappearance of their fields and their job caused by population growth of Jambes

The « Frairie des Masuis et Cotelis jambois » folk band was founded in 1960 by Mr Jean Mosseray (helped by Mr J. Briac). The aim was to revive the ancestral traditions of Jambes. The support of historian Félix Rousseau and musicologist Ernest Montellier was decisive to give authenticity right from the beginning.

This ancient part of the city of Namur, indeed, assumes a life of its own for nearly ten centuries. They are about 40 dancers and musicians in the group.

The shimmering traditional costumes are those worn by Masuis and Cotelis in the XVIIIth century on Sundays and feast days. They have been designed according to historical paintings and engravings exhibited at Groesbeek - de Croix Museum in Namur.

Dancing girls wear a jacket or a lace-up vest, an apron on a full skirt, white stockings, and a traditional bonnet as headdress.

Dancing partners wear a sleeveless vest or a long-sleeved jacket, a wide belt, white socks, a black narrow-brimmed felt hat. Musicians, on the contrary, wear a single-breasted jacket with collar. 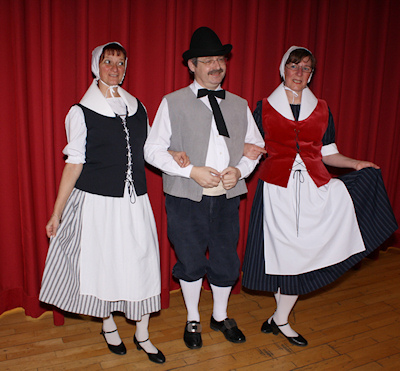 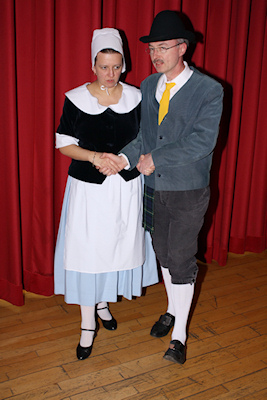